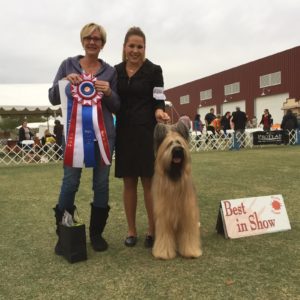 Hello, my name is Gina Klang. I was born in Detroit Michigan and moved to California at an early age. I have always been an avid animal lover for as long as I can remember. I owned American Saddlebreds in my younger years and enjoyed riding and showing them until I left for college in the early 80’s. I attended Stephens College in Columbia Missouri where I studied equine management and journalism. I have been lovingly owned over the years by a toy poodle, an Irish setter, a cocker spaniel, a bichon, a lhasa apso, a pitbull shepherd mix, two boxers, several whippets, and  two havanese.

It was not until I was married that I found my niche in dogs.  I owned my first show dog or what I thought was my first show dog in the late 80’s-a boxer named Betsy. I soon learned that Betsy was not a show dog at all. But, I did learn the basics of dog showing. In 1995, I successfully owned and finished my first briard champion Mon Jovis Lolipop and my fascination with Briards began.

And, so began MON AMIE. Mon Amie translated means My Friend in French. Because,  France is the briards country of origin and because I view Briards as my best friends I thought it a very befitting name.  It did not take long for me to realize that my life not only centered around my family but my briards as well.   I cannot imagine my life without a briard or should I say briards.  After owning many other breeds, there is to me no other dog that measures up.

I have made it my life’s dream to breed sound dogs of both mind and body. I actively work through my breeding program to breed dogs for the betterment of the breed. My goal is to better my own lines and to reproduce beautiful representations of this amazing breed.

I am currently loved by not only the Briards, but my husband, and my three children.